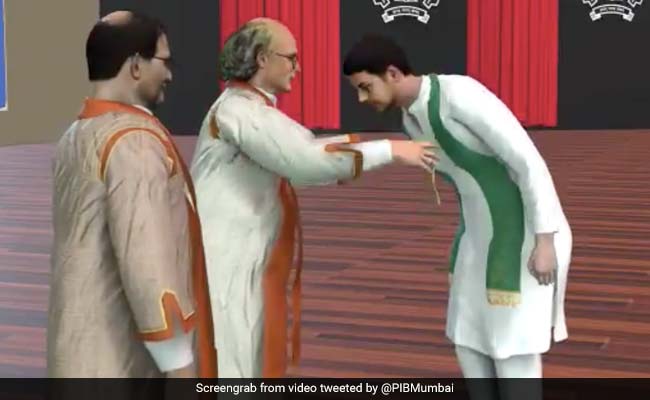 IIT Bombay Convocation: Digital avatar of a student is seen receiving a medal.

Months after the Indian Institute of Technology Bombay became the first major institute to scrap face-to-face lectures this year amid the novel coronavirus pandemic, it held its 58th convocation in “virtual reality mode” on Sunday.

While the students couldn’t congregate for the convocation, where Nobel prize winner Professor Duncan Haldane was invited as the chief guest, they were seen along with the guests in their digital avatars on a virtual stage.

This is for the first time in the institute’s 62-year history that it gave away medals, awards and degrees to the virtual avatars of the students on the day of convocation.

“There is a lesson for everyone involved in research,” Professor D Haldane, a British-born physicist who won the Nobel Prize in Physics in 2016, said during the nearly two-hour long event, which was streamed live.

“India is poised to stake its claim as one of the world’s great innovation hubs,” said Guest of Honour Stephen A Schwarzman, described as a “world-renowned investor and philanthropist” in an official statement. The guests addressed the students virtually.

A video shows the digital avatar of a student being awarded “President of India’s Medal for 2020”.

India is poised to stake its claim as one of the world’s great innovation hubs: Stephen A. Schwarzman

There is a lesson for everyone involved in research: Nobel Laureate Prof. D Haldane

In June, IIT-Bombay became the first major institute to scrap all face-to-face lectures for the rest of the year. In a Facebook post, IIT Bombay Director Subhasis Chaudhuri said: “For IIT Bombay, students are the first priority. We took the first step in India in concretely deciding how we must bring a closure to the current semester to help our students.”

“But given the current condition of the pandemic, how do we plan for the next semester for our students? Again, after a long deliberation in the Senate, we have decided that the next semester will be run purely in the online mode so that there is no compromise on the safety and well-being of the students,” he further said.

He also made an appeal to help the needy students. “We have estimated that we need about ₹ 5 crores to help those needy students. We look forward to your overwhelming support to help these bright young minds to continue their learning without any further hindrances or delays,” Mr Chaudhuri wrote on Facebook.

Maharashtra is the worst-affected state in the country by the outbreak with over 6.7 lakh cases so far. Across India, over 30 lakh cases have been logged since the beginning of the pandemic.