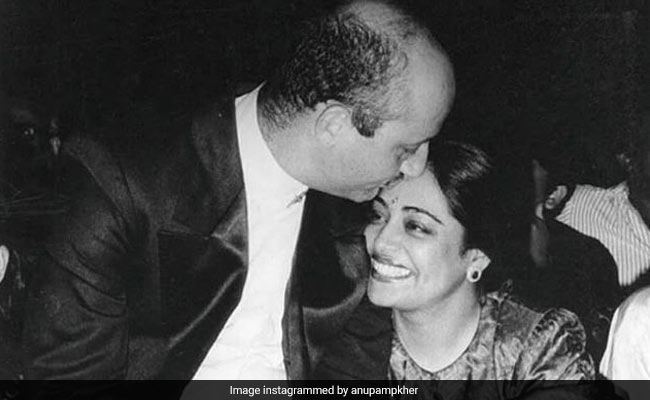 Actor Anupam Kher shared an adorable post for his wife Kirron Kher on their anniversary today, in which he wrote, “You are a great girl.” Anupam Kher, who divides time between Mumbai and New York, shared a throwback picture of the couple and captioned it: “Dearest Kirron… Happy 35th anniversary. We have known each other for almost 45 years. It is almost a lifetime. We have grown up together as two strong individuals. We don’t get to spend much time together. You are busy being a parliamentarian (she is a BJP member of parliament from Chandigarh) and I am busy being an actor. But I am and will always be there for you. You are a great girl. Stay safe. Love and prayers always.” Anupam Kher married Kirron Kher in 1985.

Anupam Kher currently plays one of the protagonists on American TV series New Amsterdam. He was last seen in Bollywood film The Accidental Prime Minister, in which he played the role of former Indian prime minister Manmohan Singh. He hasn’t announced his upcoming projects yet.

As of now, Anupam Kher is staying in Mumbai with his family. Anupam Kher was in Mumbai when the nationwide lockdown (because of the coronavirus outbreak) was announced in March. In July, four members of Anupam Kher’s family – mother Dulari, brother Raju, sister-in-law Reema and niece Vrinda – tested positive for the coronavirus. His mother was hospitalised but she made full recover and she was discharged after two weeks.

“I’ll Be There For You,” Writes Anupam Kher In Anniversary Post For Kirron Kher